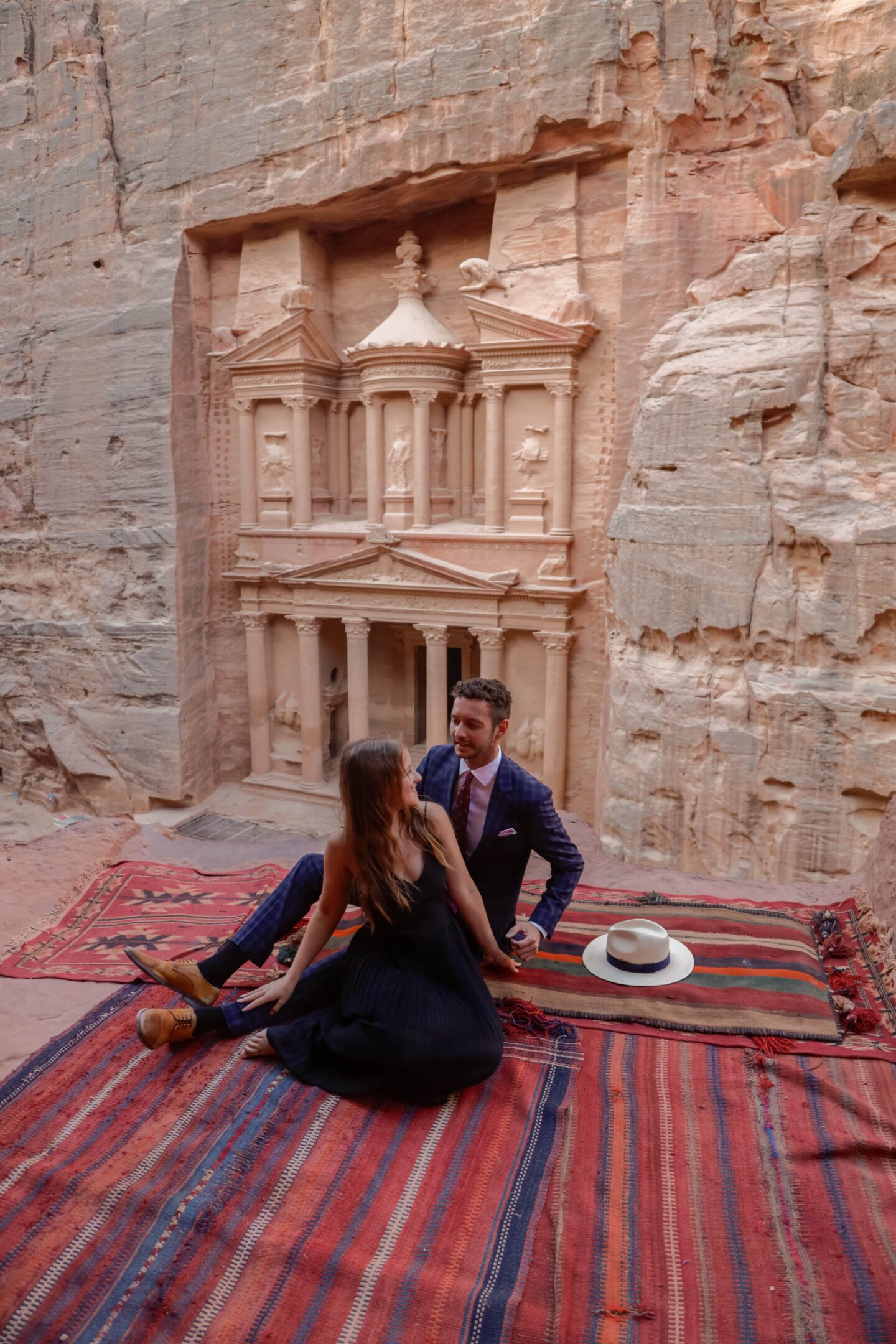 A trip to Jordan, my travel guide for unforgettable impressions. Jordan – a unique country in the Middle East – has been at the top of my travel list for a long time. The country is incredibly diverse, historic buildings in Petra or Jerash, swimming in the Dead and Red Sea as well as breathtaking desert landscapes in Wadi Rum, just to name a few highlights. Today, I would like to tell you more about my exciting trip with Jordan Tourism and the Royal Jordanian Airline.

The historic Nabataean trading city of Petra, which is over 2000 years old, is probably the most famous sight in Jordan. It is one of the “New Seven Wonders of the World” and has been a UNESCO World Heritage Site since 1985. Incredibly, the impressive pink stone city was forgotten for over 1000 years. This was until a Swiss explorer named Johann Ludwig Burckhardt rediscovered the city in 1812. 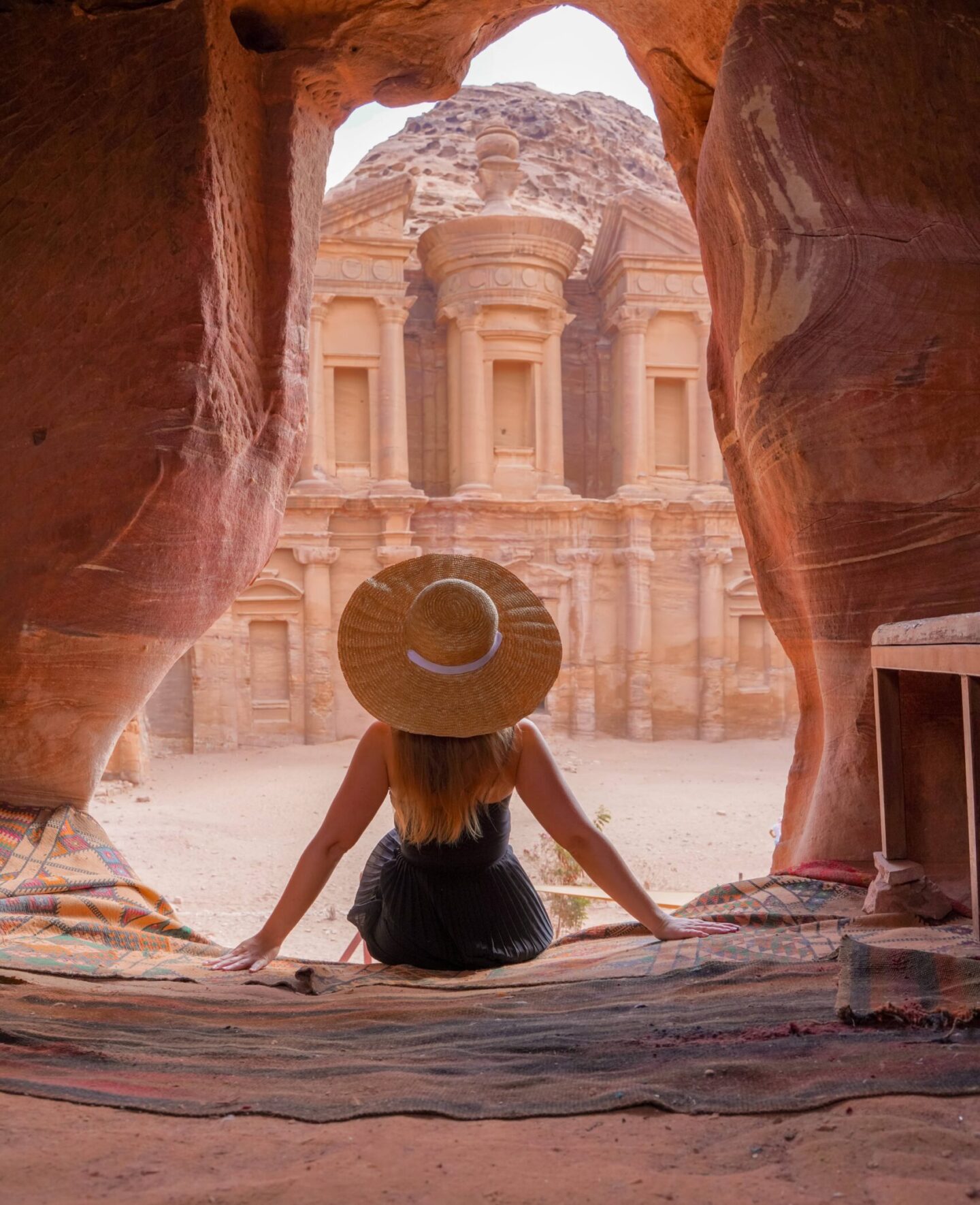 The most famous building in Petra is probably the so-called treasure chamber – even though there was never any treasure there – it served as a tomb. The treasure chamber is world-famous thanks to the film Indiana Jones. However, there are many other impressive buildings to discover in Petra. The city was built into the rocks and was therefore always well protected from the outside. 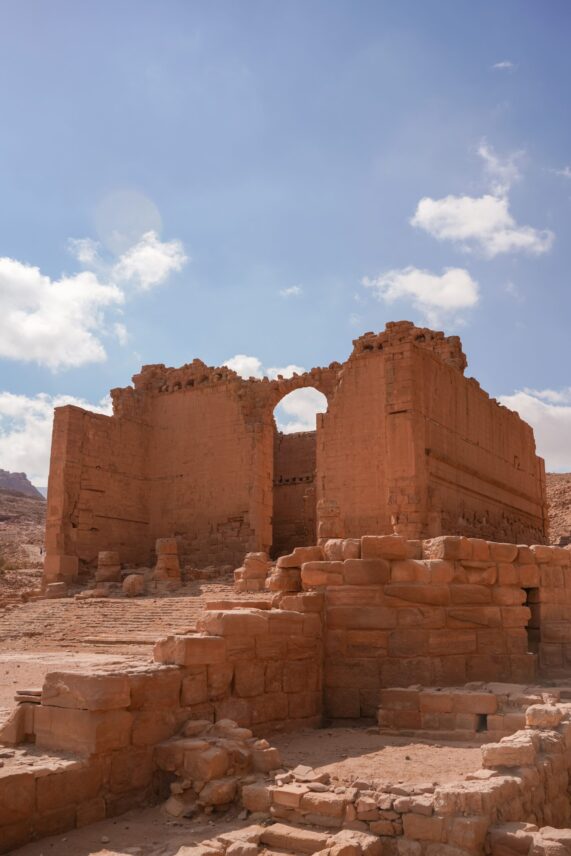 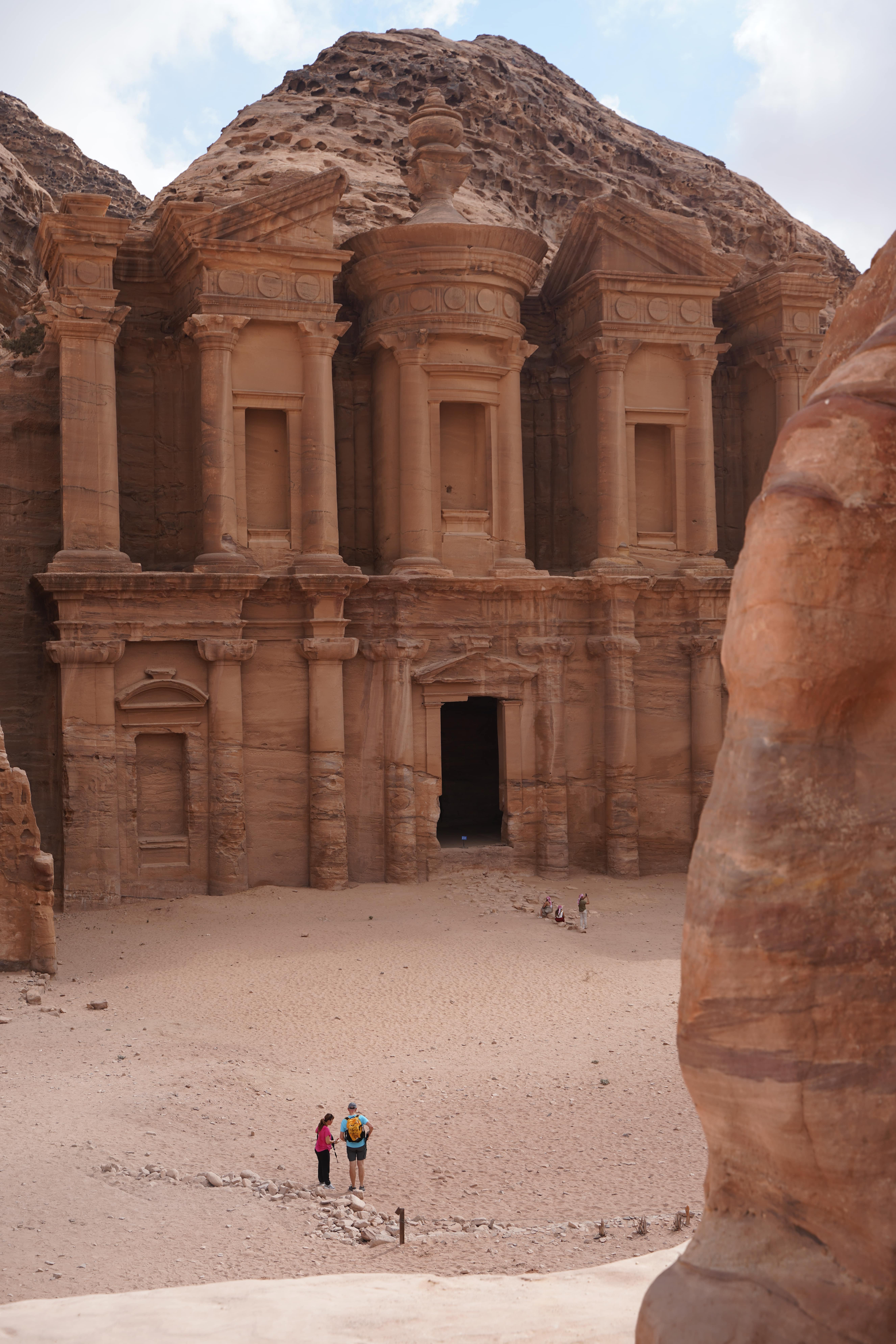 Besides the buildings themselves, the rock formations are breathtakingly beautiful. Around 20 Bedouin families still live in the caves in Petra today. They offer visitors, for example, donkeys to ride or themselves as guides. 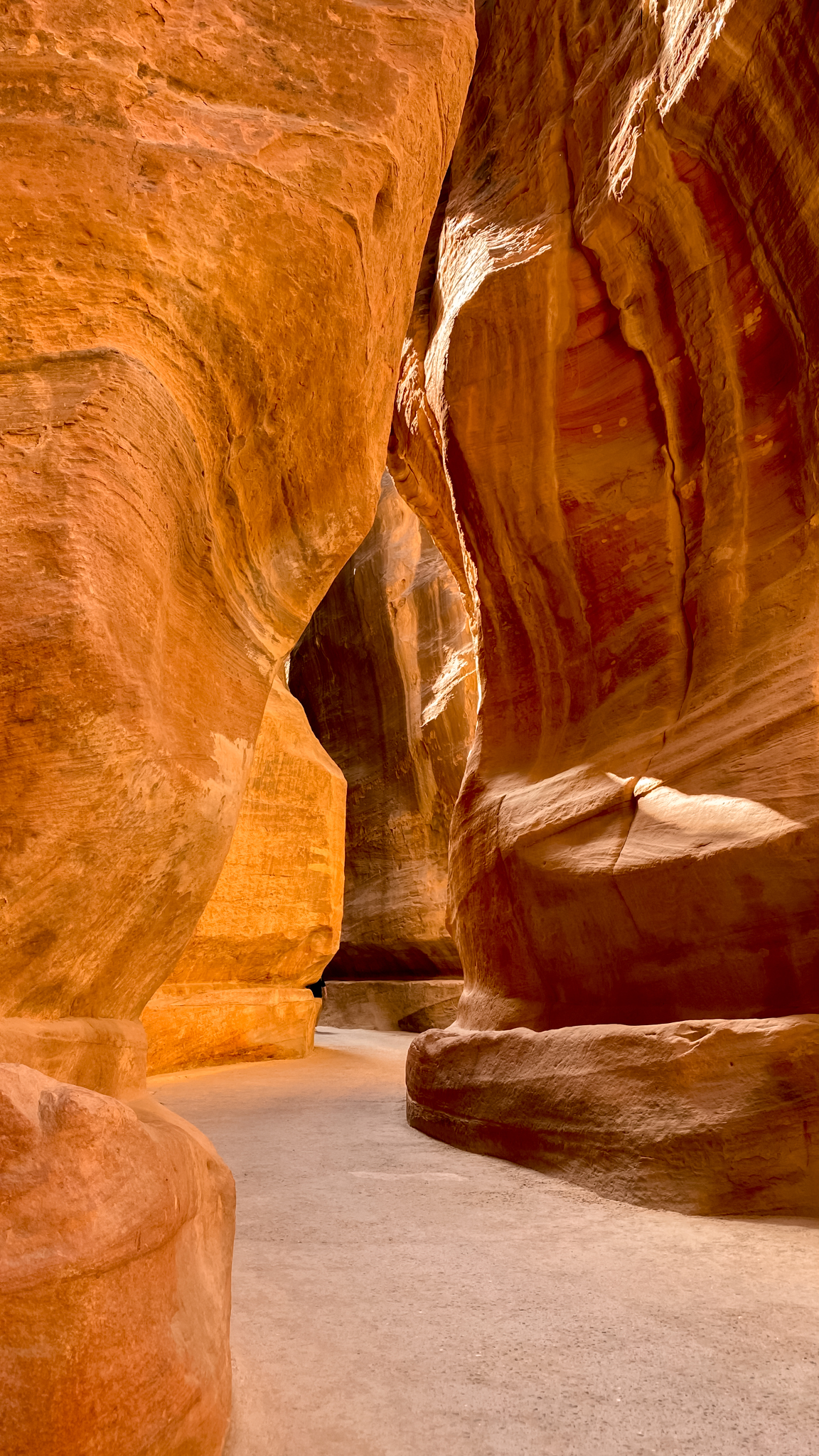 To plan your visit to Petra, it is important to know that the city is really big and spacious. Don’t miss out on visiting the monastery. It’s best to buy your tickets the night before so you don’t have to queue at 6am and can start exploring straight away. The Mövenpick Hotel & Resort Petra is the perfect place to stay during your visit, as the entrance is directly across the street. It is definitely worth getting up early, otherwise you will definitely experience the rush to the treasury. On Mondays, Wednesdays and Fridays, Petra is beautifully illuminated in the evening – to take part, you need an entrance ticket for that day.

Another place you should not miss is Wadi Rum. Here you will find an impressive desert landscape with beautiful rock formations. Maybe the landscape in my pictures looks familiar to you, after all, numerous films have been shot in this desert landscape, such as Starwars, Transformer or The Martian.

On a jeep tour, you can see Wadi Rum with its rock formations – which are up to 1750 metres high – and its red sand dunes. You should not miss the sunset in Wadi Rum, so I highly recommend taking the jeep tour at this time. 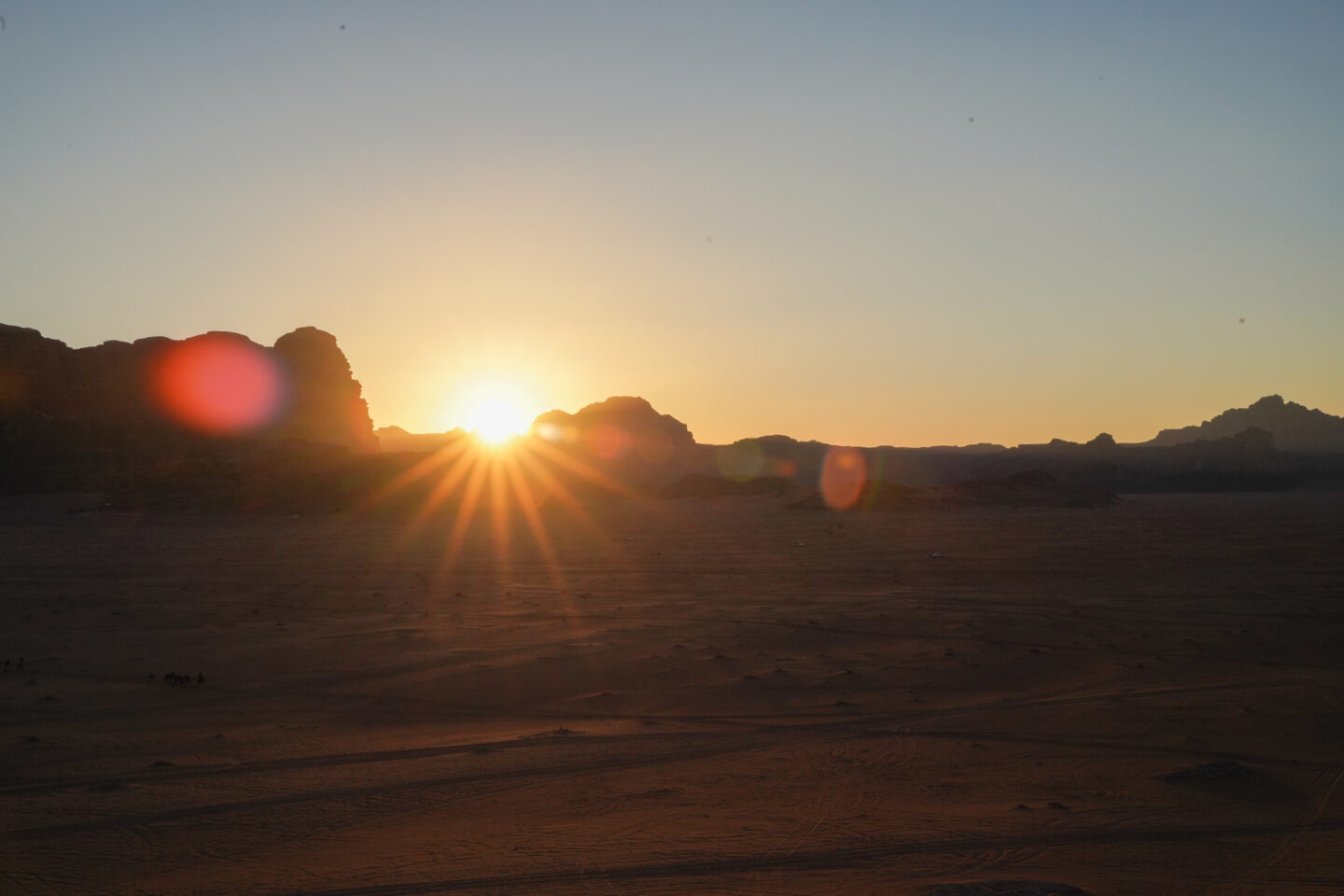 Another highlight of my trip was the camel tour through Wadi Rum. Riding through the desert landscape offered breathtaking views and was a really great experience. As well as stargazing in the night sky and of course the sunset. By the way, about 20 Bedouin families, some of them settled, still live in and around Wadi Rum. 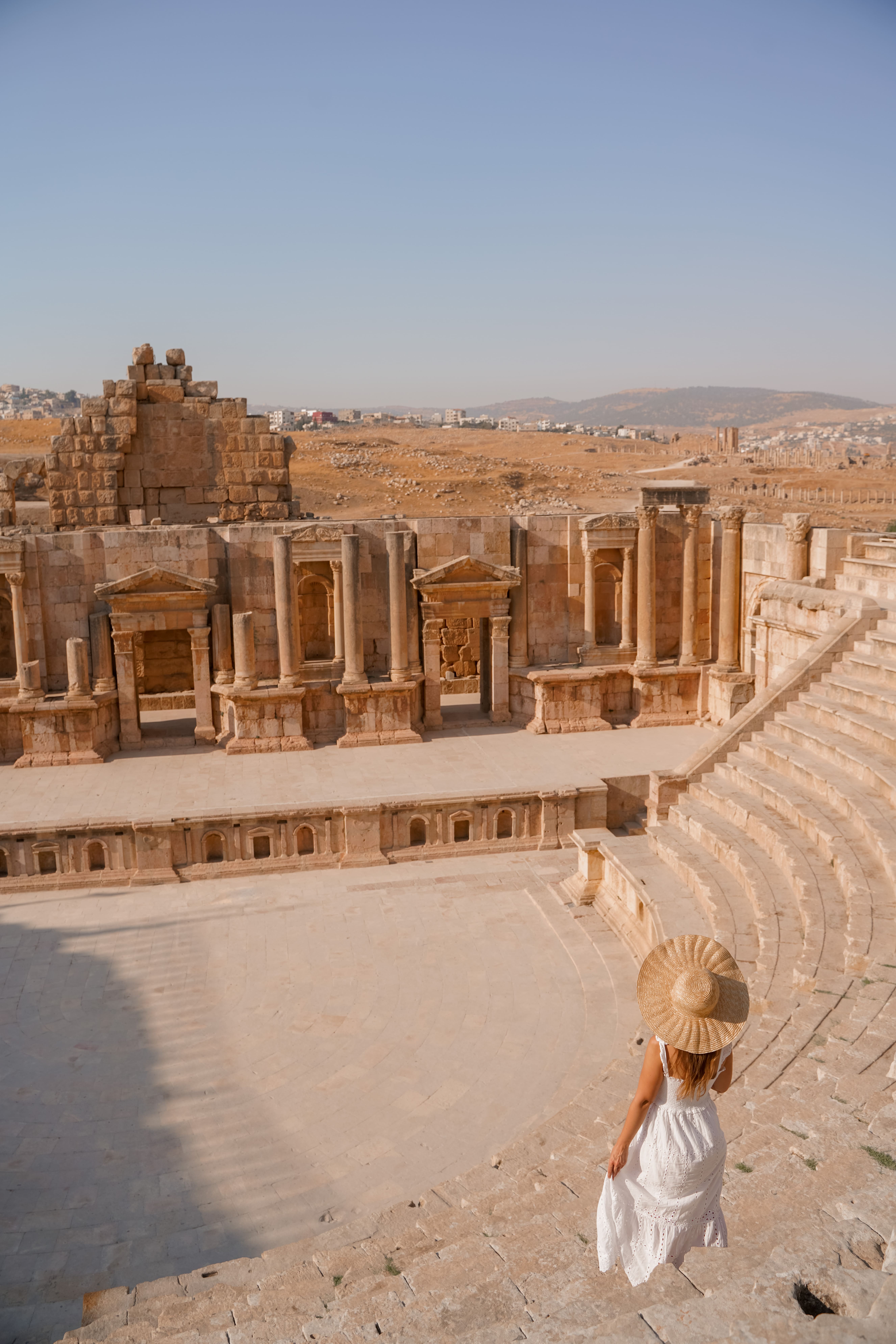 The city of Jerash lies about 40 kilometres outside Amman and is well worth a visit. There are numerous buildings from antiquity to discover, including the Hadrian’s Arch and various temples, as well as a very well preserved theatre that can seat up to 5,000 people. 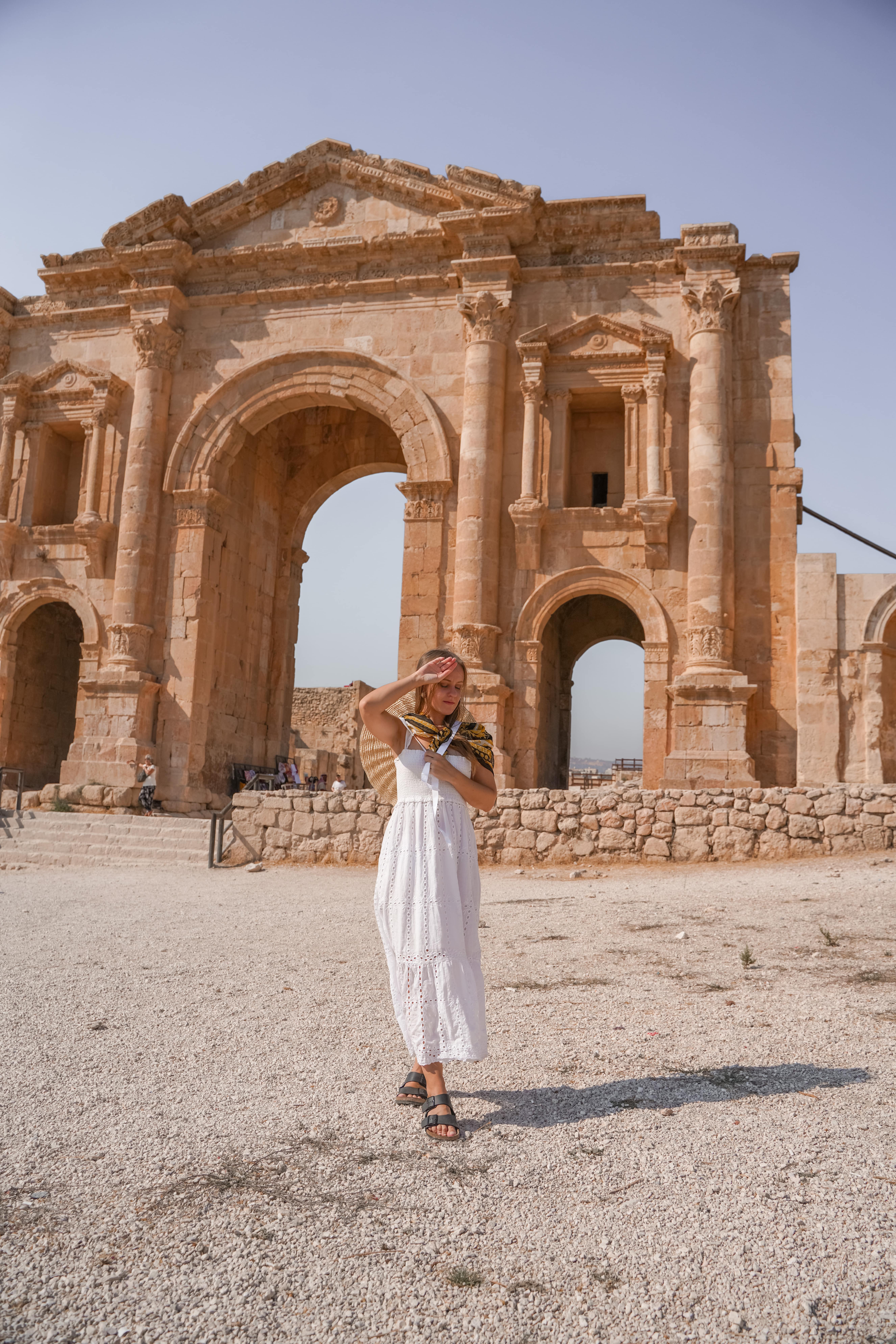 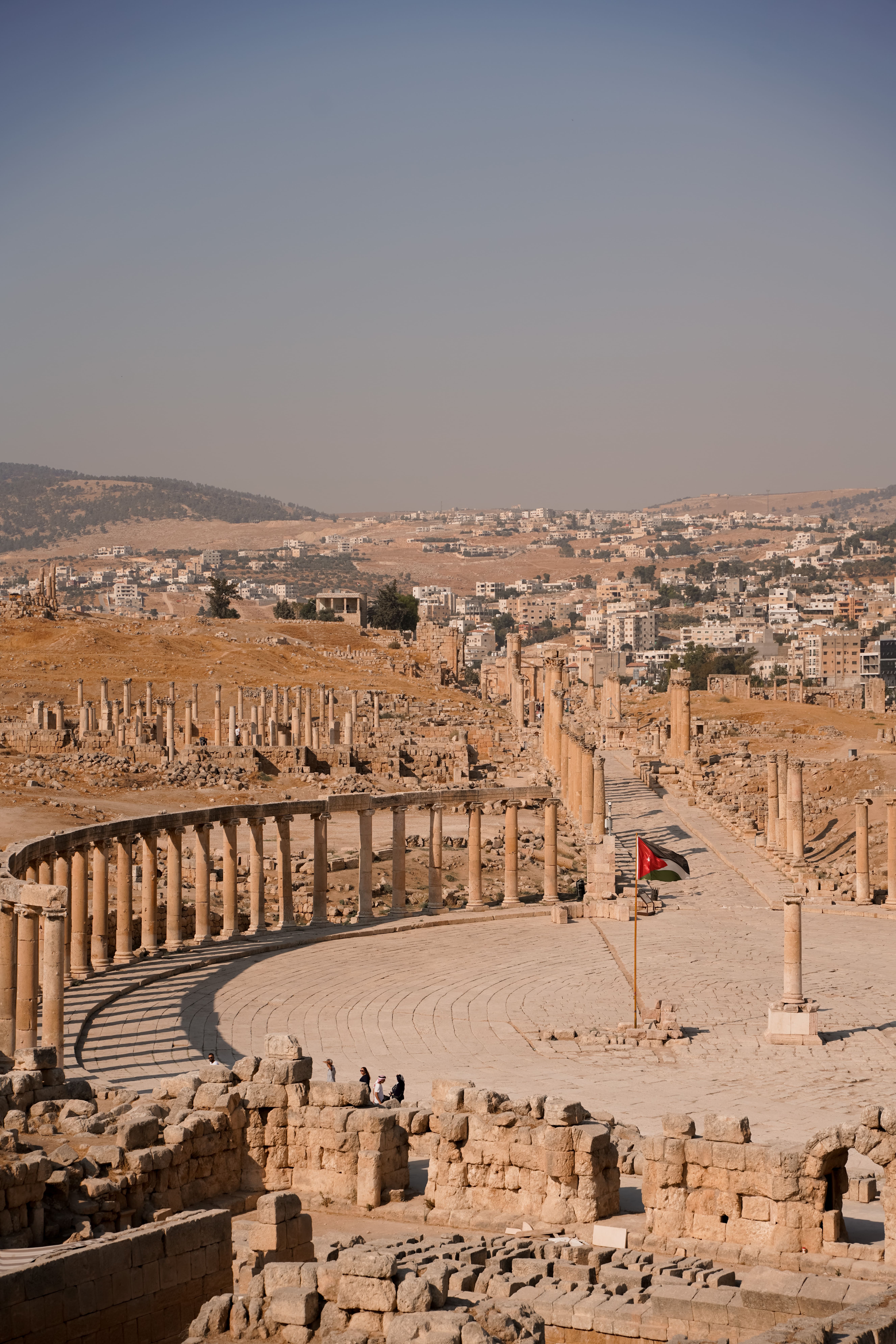 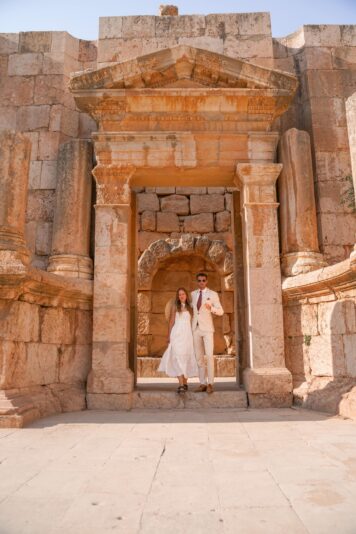 The first traces of human settlement in Jerash date back to the 6th millennium BC. Hadrian’s Arch was built in the winter of 129/130 in honour of the Emperor Hadrian, who visited the city at that time. The heavily destroyed arch was rebuilt from 2003 – 2008. 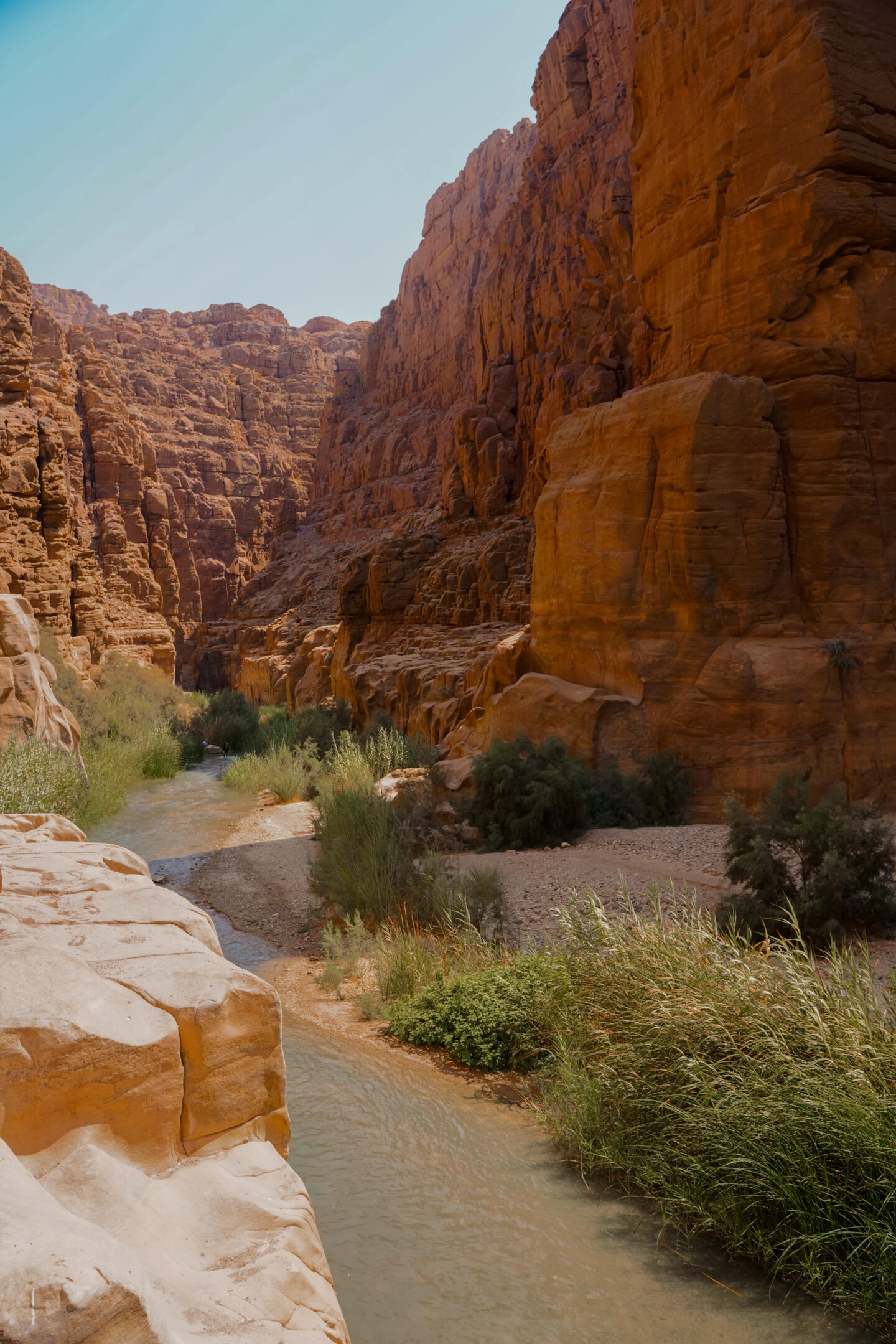 If you want to go on a little adventure, you should not miss the canyoning tour in Wadi Mujib. On trails of varying lengths, you can view the rock formations from the water. Well equipped, you will go on an incomparable discovery tour for at least 2 hours. 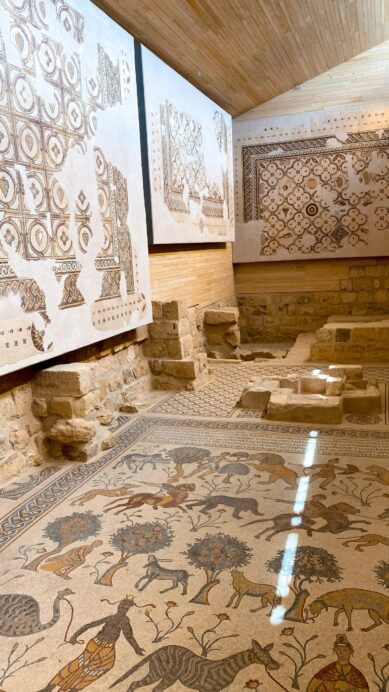 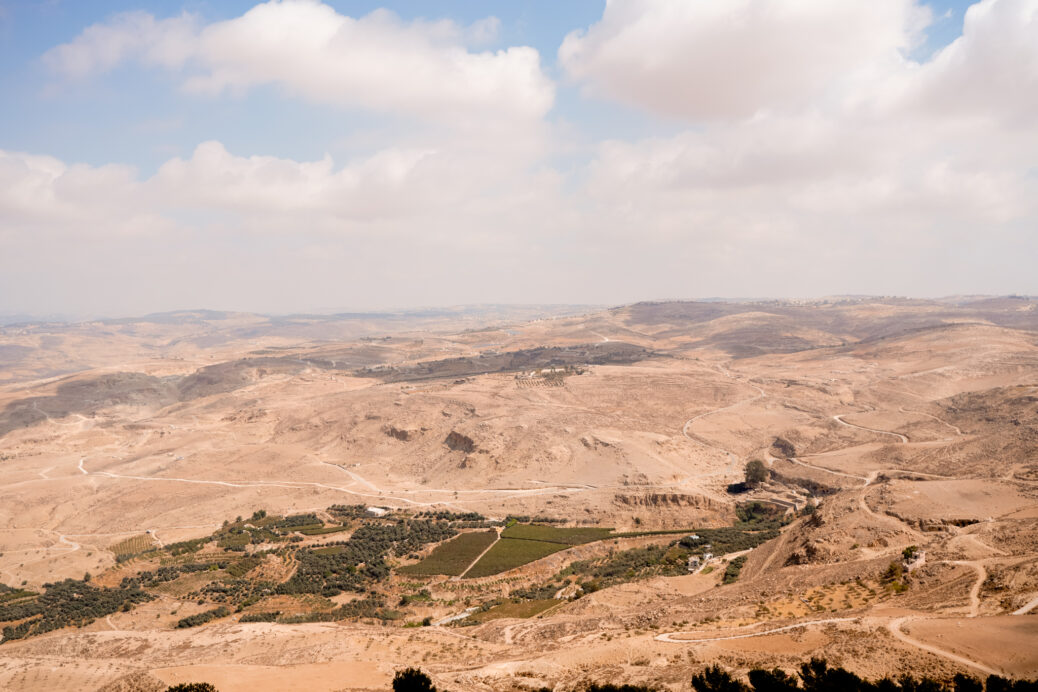 Mount Nebo is 808 metres high and an important vantage point. You can see the JorDan valley, Palestine and Israel. It was also from here that Moses was able to see the Holy Land, but he died before he could visit it himself. The remains of the Church of Moses – which has been partially rebuilt – show wonderful mosaics from 530 AD. 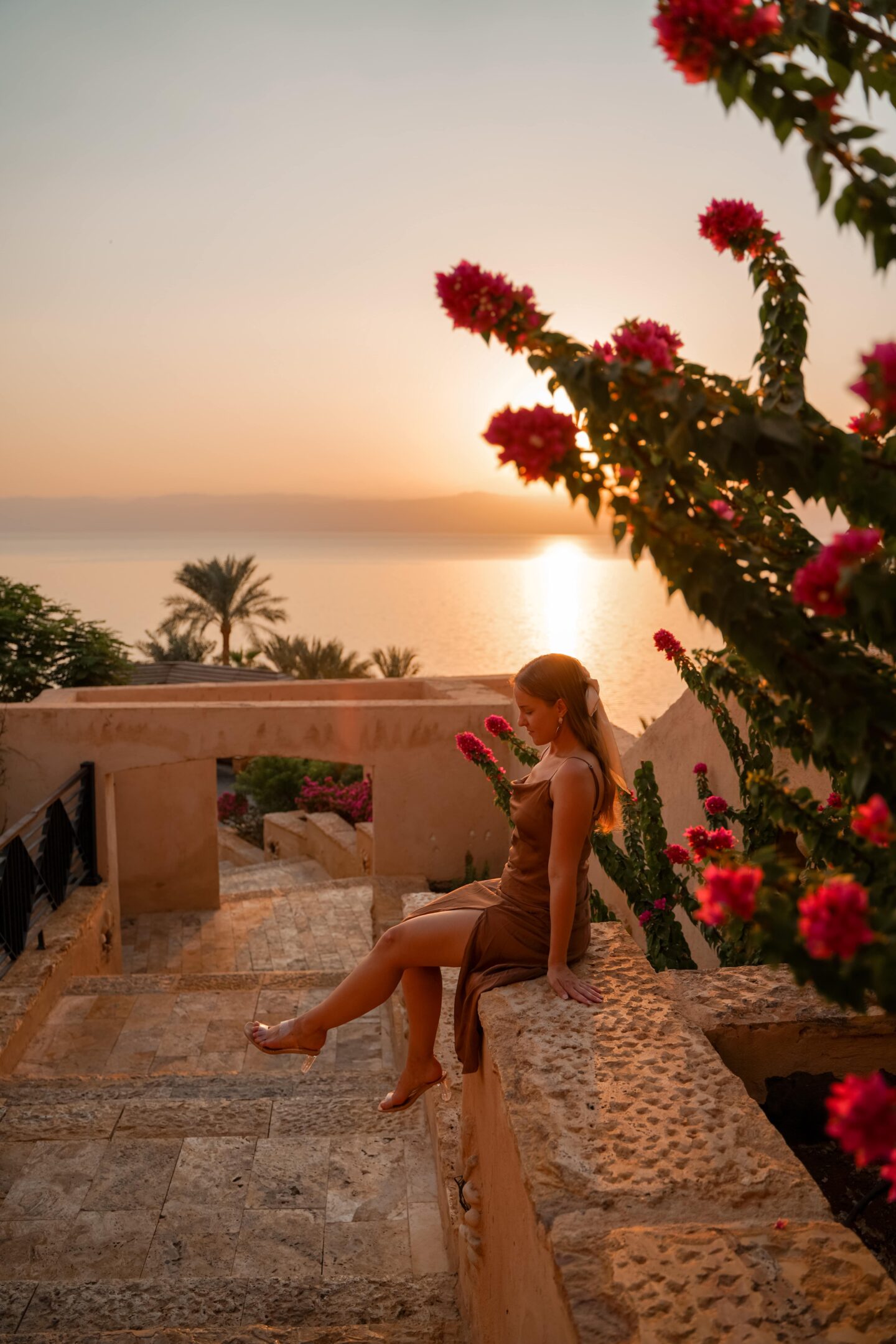 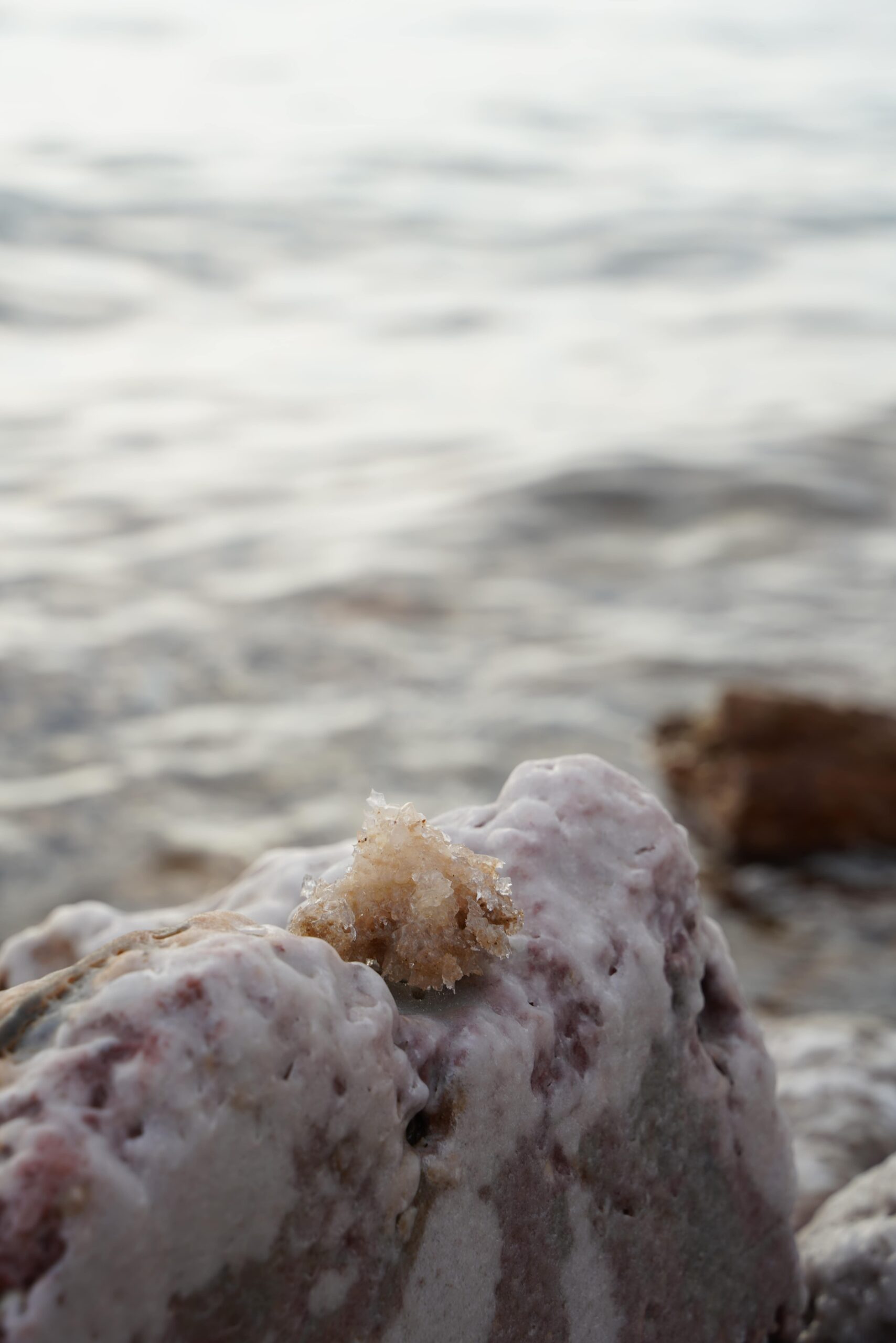 Before bathing in the Dead Sea, it is necessary to rub yourself with the mud in order to benefit from the therapeutic effect to the maximum. Afterwards, you can let yourself drift. Swimming, on the other hand, is rather difficult due to the high salt content. Don’t miss the sunset at the Dead Sea. 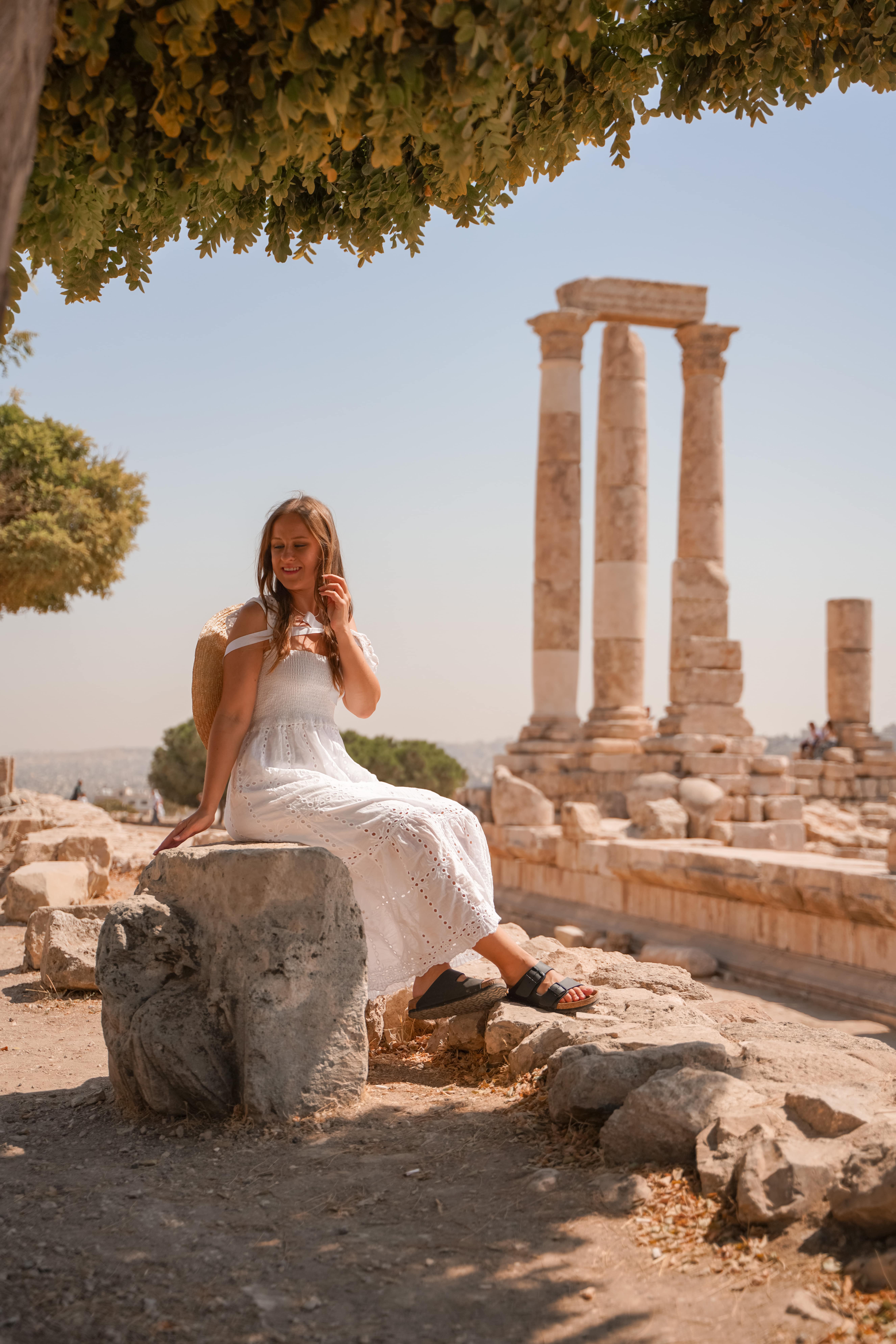 Don’t miss the Citadel in the capital Amman. The former capital of the Hashemite Kingdom was one of the first settlements in the world. The impressive ruins of the former Temple of Hercules and the Roman temple are located on the Citadel hill or below it. The landscape with the desert on one side and the lively valley on the other shows the versatility as well as the combination of antiquity and modernity. 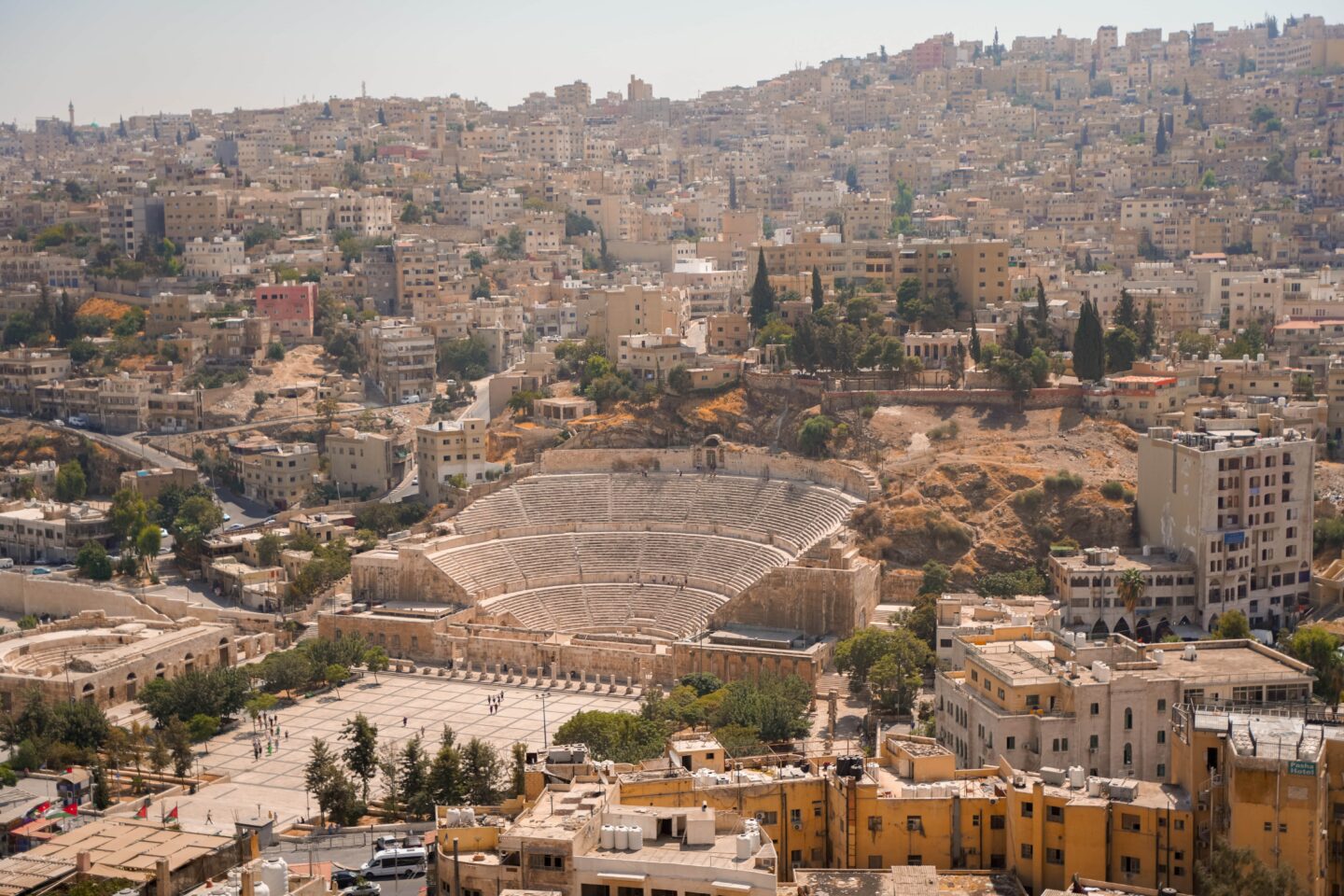 The Roman Theatre of Amman is a 2nd century theatre with a seating capacity of around 6,000. It is a famous landmark of the capital and dates back to Roman times, when the city was known as Philadelphia.

Snorkeling in the Red Sea 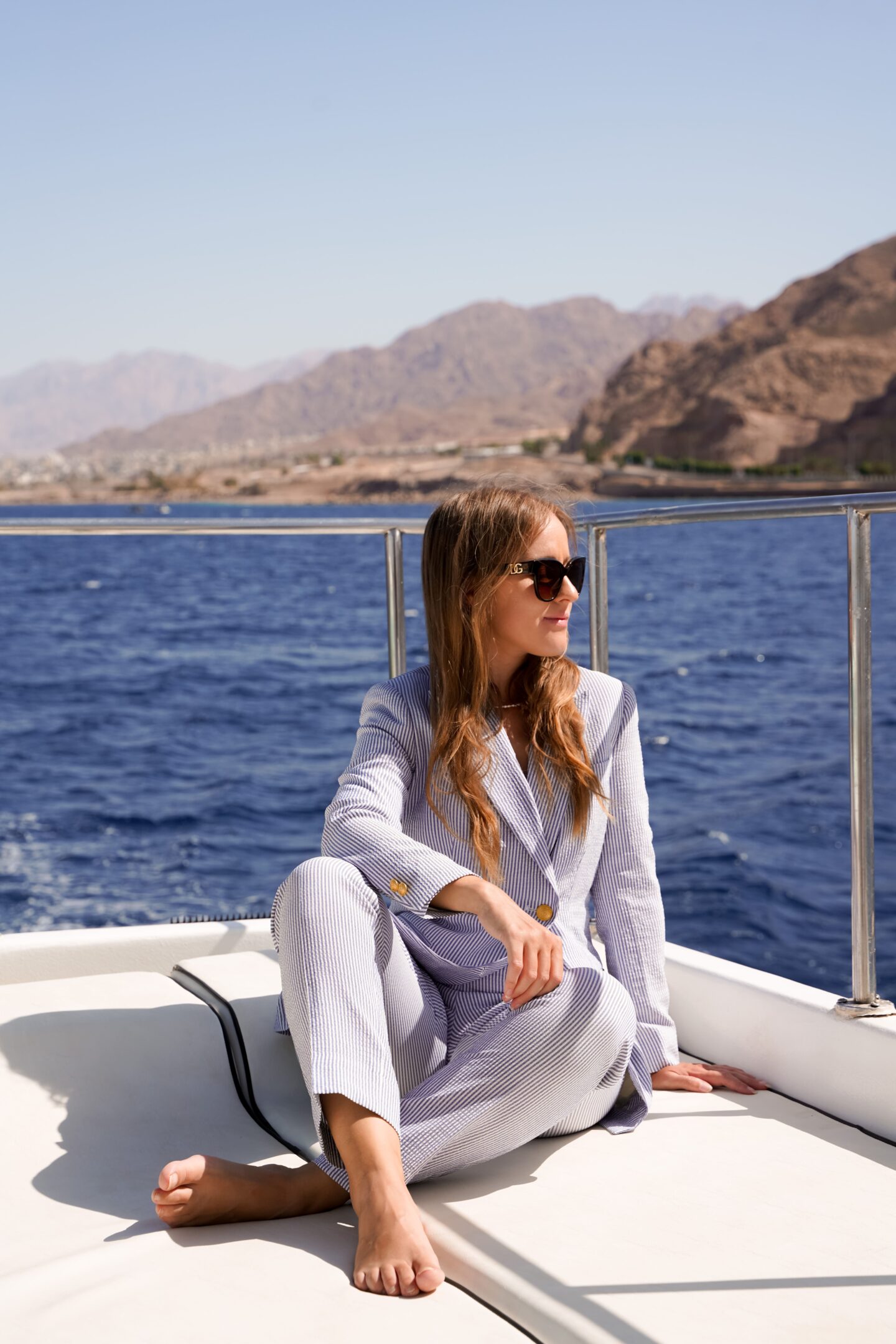 Jordan also lies on the coast of the Red Sea, which is wonderful for snorkeling. On a snorkeling boat tour you can observe marine life such as turtles, corals and numerous species of fish. After snorkeling, a fine lunch is even served on the boat. Before heading back to the beach. 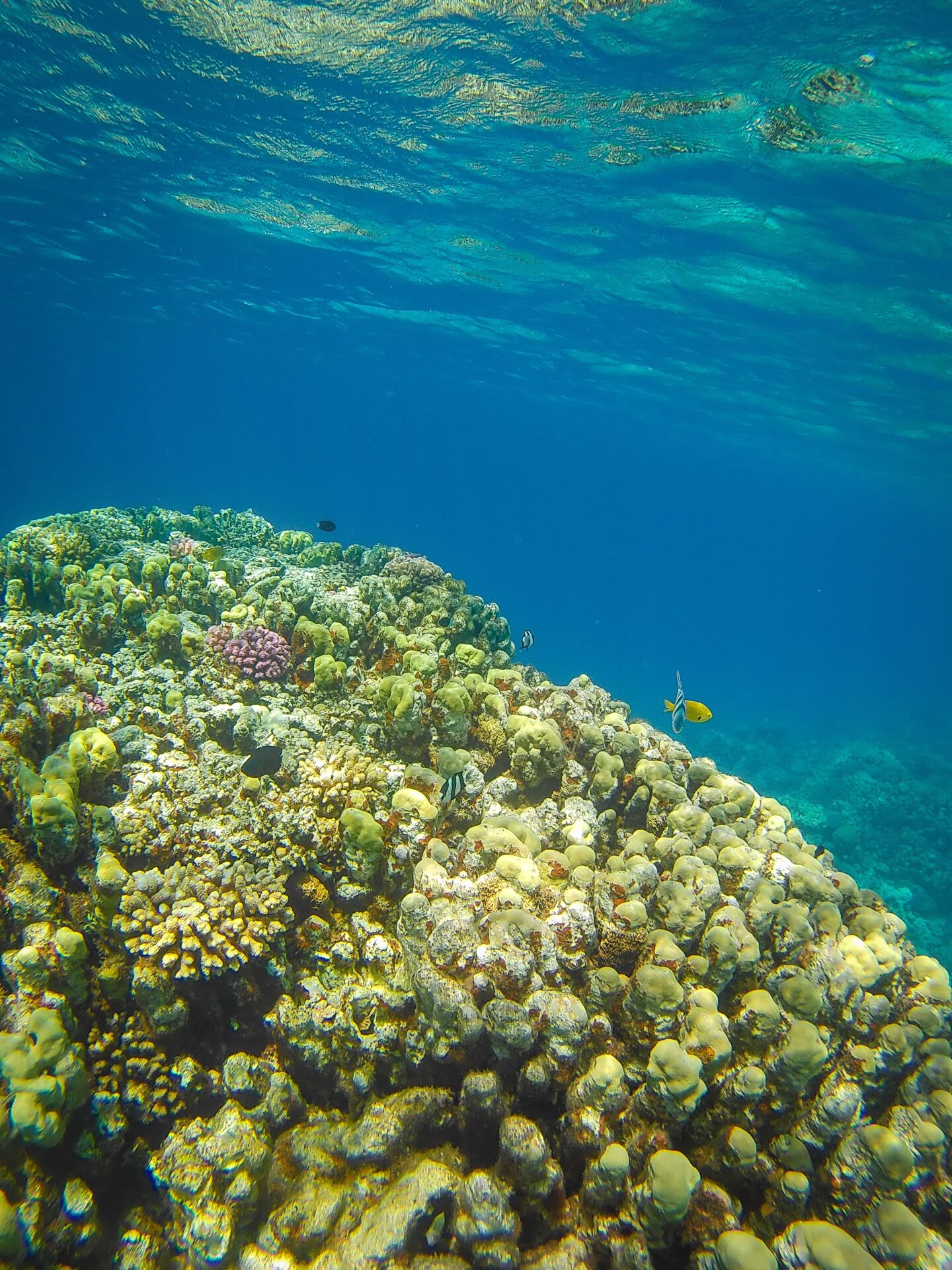 This part of the Red Sea is called the Gulf of Aqaba and stretches from its origin at the Strait of Tiran for about 180 km. At its widest point it measures 89 km. At the northern end are three important cities: Taba in Egypt, Eilat in Israel and Aqaba in Jordan. Aqaba is the only seaport in Jordan. 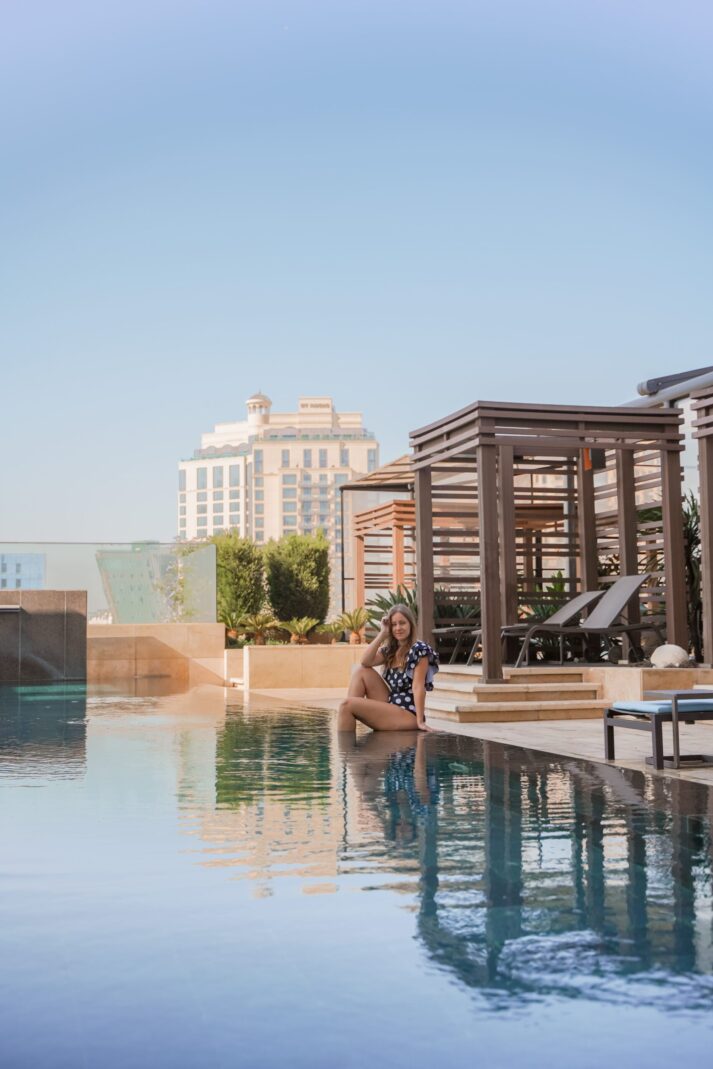 There are many places to stay in Jordan. In Amman, I highly recommend the Fairmont Amman Hotel, which offers spacious rooms, a rich international breakfast buffet and a luxurious pool and spa area. 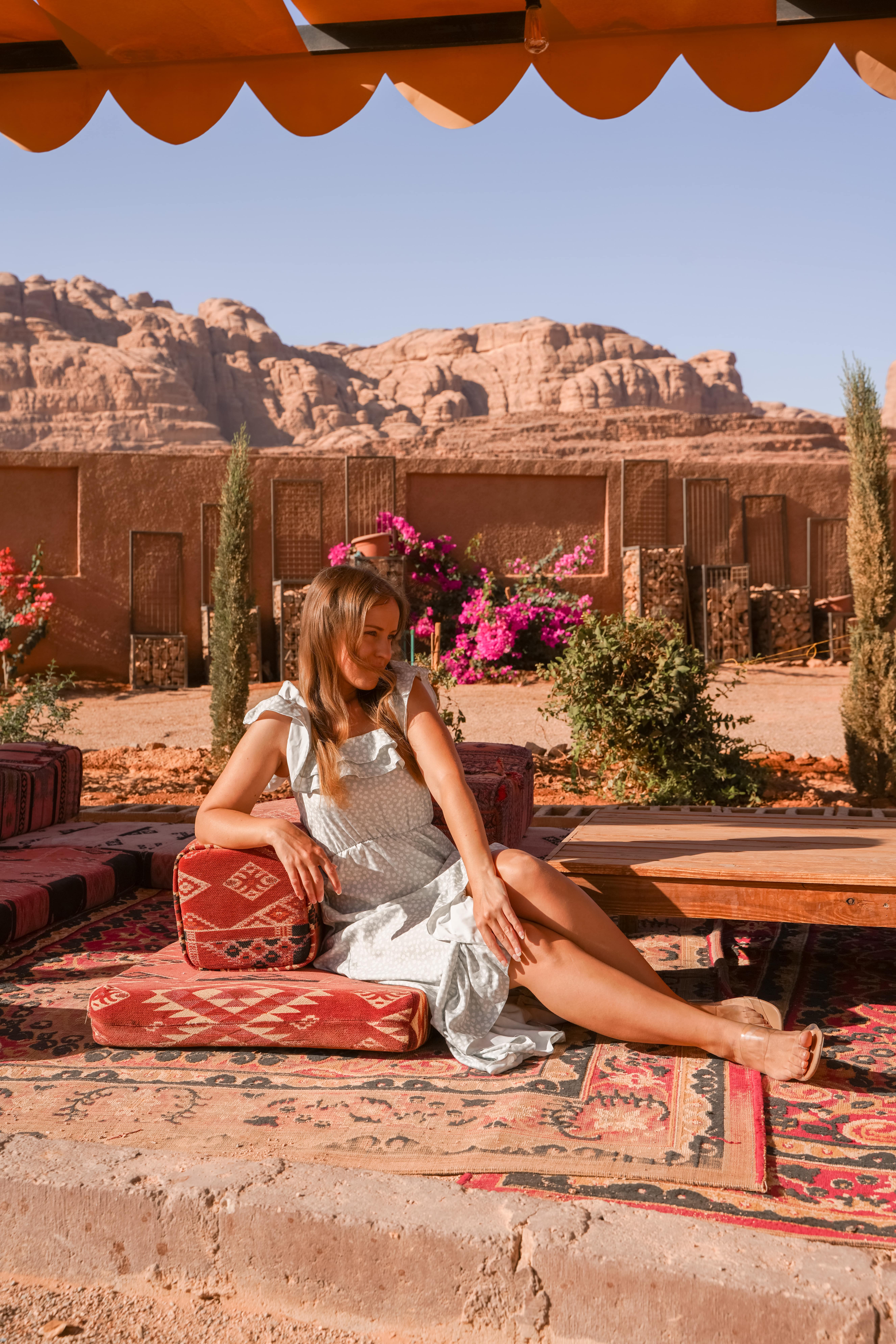 For your stay in Wadi Rum, I recommend booking one of the countless luxury campsites or glamping sites, as you will be right in the middle of the action and can let the desert region take its effect on you. The Mövenpick Hotel & Resort Petra is located directly opposite the entrance of Petra, so it’s worth staying there overnight and getting there as early as possible in the morning. 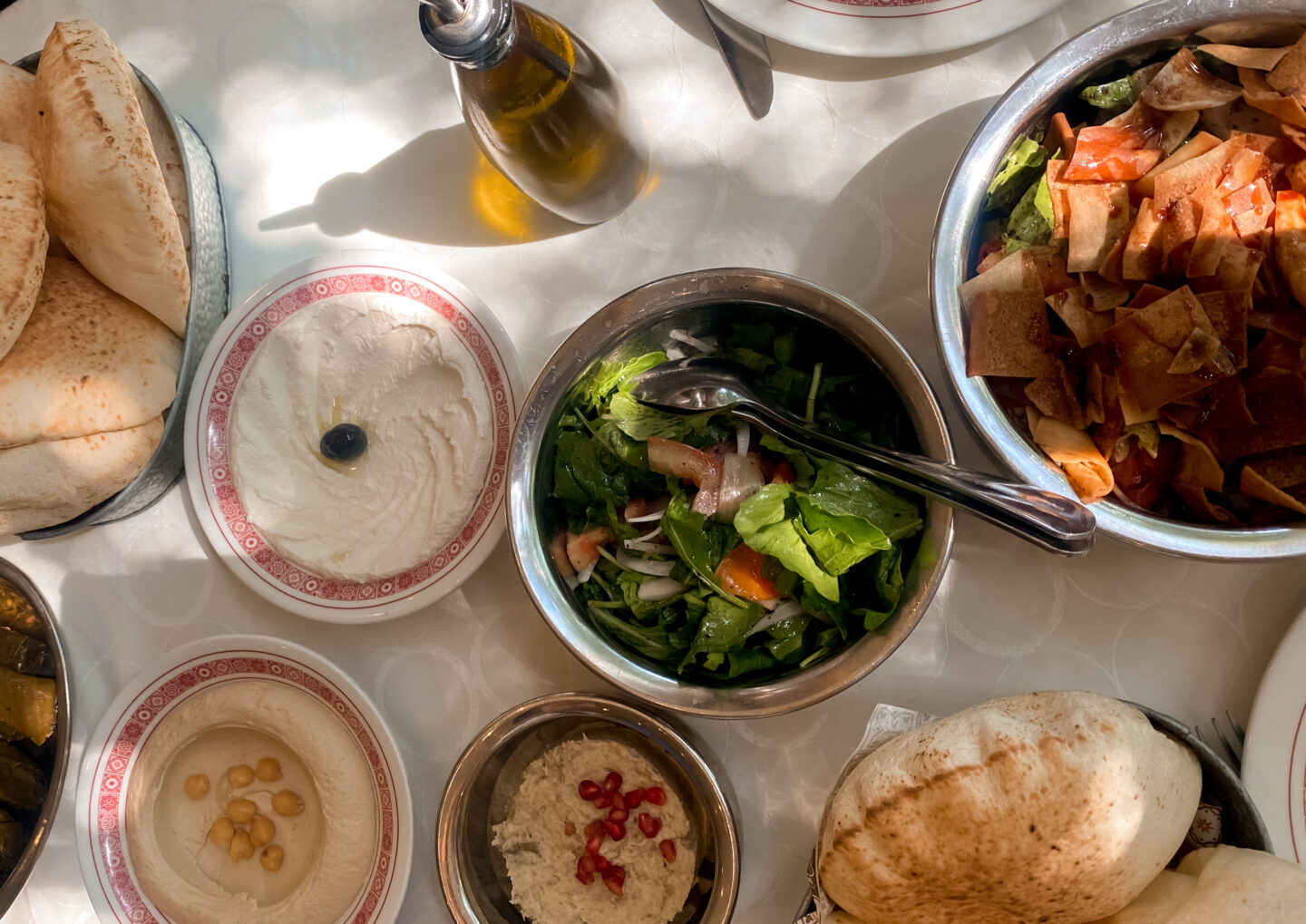 On my trip, I was able to try out some traditional dishes. Maklubbeh is one of the dishes you can’t miss in Jordan. The name means upside down and the dish contains rice, vegetables and sometimes chicken in a layered form. It is served on a large platter onto which it is tumbled upside down from the pan. The traditional Bedouin dish is called mensaf (pronounced mansuf). Lamb is served on a bed of rice. In addition, numerous other delicacies are served, such as baba ganoush, taboulee or fattoush. 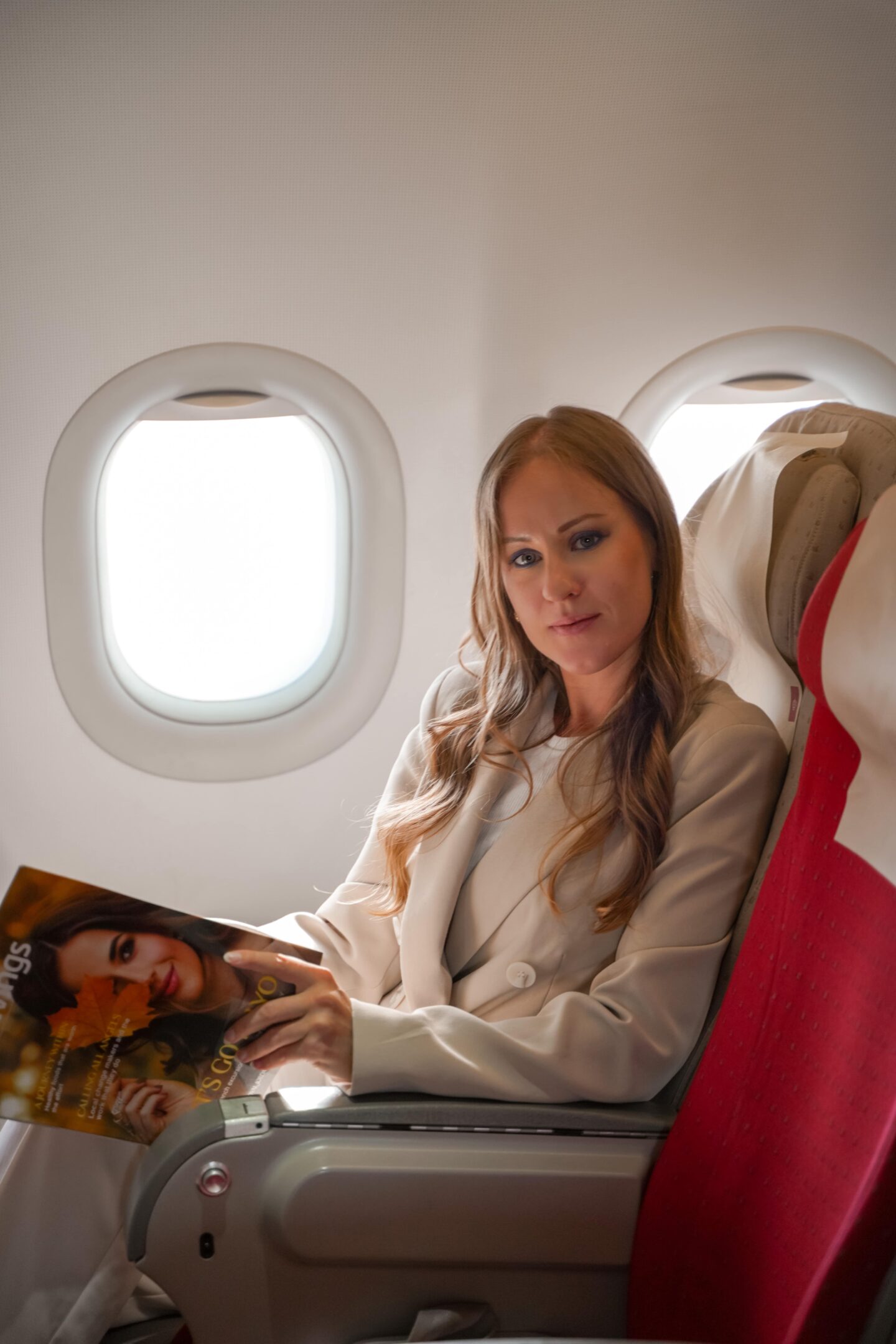 Royal Jordanian Airlines flies twice a week from Zurich or Geneva to Amman – the capital of Jordan. Both outbound and return flights are on Wednesdays and Saturdays. We reached Amman in only 4 – 5 hours. The crew was very attentive and extremely friendly. Culinary delights were also provided on board. On the way home we flew from Aqaba to Amman. If you still have time left, it is worth visiting the Royal Jordanian lounge to enjoy a fresh snack and relax. Thanks again Royal Jordanian for the great flight.

After our arrival in the capital Amman, we stayed there for one night and explored the Citadel and Jerash the next day. We then went to the Dead Sea and Wadi Mujib before driving via Mount Nebo to the city of Petra. Afterwards we drove to Wadi Rum. At the end of the trip we went to Aqaba on the Red Sea and flew back to Zurich via Amman.

Many thanks again to  Visit Jordan and Royal Jordanian Airlines for this unforgettable trip.